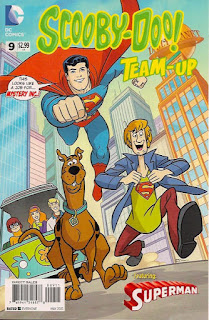 When Caesar’s ghost appears in the Daily Planet’s offices, Superman calls in Mystery, Inc. to help him find out the truth behind the haunting. It turns out to be the work of the Prankster, who transforms Superman into a monstrous form with Red Kryptonite. With the help of Superman’s dog Krypto, as well as Scooby and Shaggy inadvertently drinking the serums that once gave Lois Lane and Jimmy Olsen superpowers, the gang saves the day. Velma alludes in passing to the events of an earlier story, “A (Super) Friend in Need”; however, given that the Super Friends, as a superhero team, do not fit into the CU, this should be disregarded. Lois seems unaware that Clark Kent is Superman, even though CU continuity holds that she and Clark have been married for over two decades by this point. Lois must be merely keeping up appearances in front of her coworkers and Scooby and the gang in order to keep Clark’s dual identity a secret.