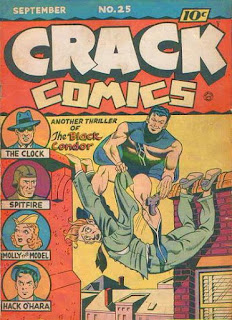 Brian O’Brien (aka the Clock) forbids his young female sidekick Butch to accompany him on an investigation. Butch goads him by saying, “I should have teamed up with the Spirit—HE’D appreciate me!” O’Brien responds “The Spirit—bah!” The Clock, originally published by Centaur, was the first original masked hero to appear in comic books, and is more “pulpish” than many of those who followed him. The reference to the Spirit brings him into the CU. This story originally ran untitled; I have used the title given on the Grand Comics Database website.

Email ThisBlogThis!Share to TwitterShare to FacebookShare to Pinterest
Labels: Crossover Covers, The Spirit