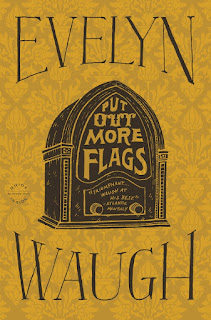 The further adventures of Basil Seal during World War II. Basil visits Alastair and Sonia Trumpington. Peter Pastmaster rejoins the Household Cavalry. Sonia tells Basil Margot Metroland says the last war was absolute heaven. Basil was once leader writer for The Daily Beast, and also served in the personal entourage of Lord Monomark. Pappenhacker of the Hearst press is mentioned as having been informed of a Polish submarine that is said to have arrived at Scapa. Angela Lyne had her home decorated by David Lennox just before the war. It is said of Angela’s public drunkenness it would scarcely have been more surprising had it been Mrs. Stitch herself. Lady Anchorage is present at Peter’s marriage to Lady Granchester’s daughter. Angela describes her father’s friends as men like Metroland and Copper. Ambrose Silk’s literary journal is published by the firm of Rampole and Bentley. In the late 1920s, Ambrose and his friends Hat and Malpractice issued the invitation to a party in the form of a manifesto. Basil Seal first appeared in Waugh’s Black Mischief, and several characters from that novel reappear here. Basil also appeared in the unfinished novel Work Suspended. Alastair Trumpington first appeared in Decline and Fall, while his wife Sonia debuted in Black Mischief. Alastair also appears in the story “Out of Depth.” Peter Pastmaster previously appeared in Decline and Fall, Vile Bodies, and Black Mischief. Peter’s mother Margot Metroland also made her first appearance in Decline and Fall, and went on to appear in many of Waugh’s other interconnected books and stories. Lord Metroland, her husband, is the Metroland mentioned as a friend of Angela’s father. Lord Monomark previously appeared in Vile Bodies and Black Mischief, and was mentioned in A Handful of Dust and Work Suspended. The Daily Beast, its publisher Lord Copper, Pappenhacker, and Mrs. Stitch are from Scoop. David Lennox appeared in Decline and Fall, and was mentioned in Vile Bodies. Miles Malpractice appeared in both of the aforementioned novels. Lady Anchorage appeared in Vile Bodies and was mentioned in A Handful of Dust. Mr. Rampole first appeared in Vile Bodies.