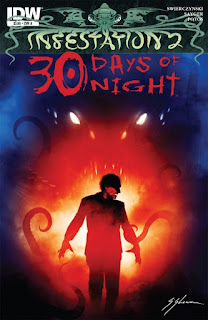 A group of vampires battle the Old Ones in the Arctic. Miskatonic University is mentioned. The vampires are from the comic book 30 Days of Night. This story is part of a multiversal crossover that features the Old Ones waking up and attacking different worlds, so therefore it doesn’t bring in any of the other continuities featured, though the DangerGirl cameo in the final issue probably takes place in the CU.