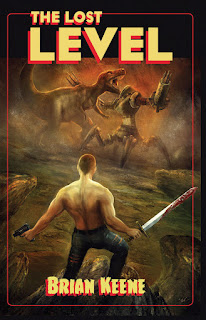 An occultist named Aaron Pace discovers how to navigate the Labyrinth between worlds, and begins exploring other dimensions before ending up stranded in the Lost Level, a reality that can be journeyed to, but never returned from, and where things are constantly arriving from parallel realities. Pace mentions it was the Simon Necronomicon that introduced him to occultism as a child, but he didn’t realize it was a fake, and it was many years before he laid eyes on the real Necronomicon. Nyarlathotep is mentioned in Pace’s spell for opening doorways into the Labyrinth. In one of the alternate universes he visits, Tony Genova is President. When he meets a group of serpent men, the Annunaki, in the Lost Level, Pace compares them to tales of the Dark Ones, a race of lizard men he’d heard about in his studies. Mushroom men living in a swamp are referenced. Pace is familiar with the Void. He also knows about Globe Package Services and the Globe Corporation, and a robot employed by a future version of the company appears. Pace meets a cowboy, Deke, from another dimension, where a zombie plague wiped out civilization in the Old West. Deke mentions he was born in his world’s version of Brinkley Springs, WV. Pace has knowledge of the Thirteen, and names Ob, Ab and Api in particular. Pace and his allies battle a giant Clicker. Pace is familiar with Black Lodge. The Labyrinth is a core part of Keene’s connected fiction. The Lost Level is mentioned in Keene’s novel Ghost Walk. The Necronomicon and Nyarlathotep are from H. P. Lovecraft’s Cthulhu Mythos. Tony Genova is from the Clickers novels by Keene and J. F. Gonzalez, where he is a mobster (as is his CU counterpart, who has appeared in other stories by Keene), and is also president in the world of Clickers vs. Zombies. The Dark Ones are also from the Clickers novels, though the species also exists in the CU, as Levi Stoltzfus mentions them in “Last of the Albatwitches.” The mushroom men in the swamp may or may not be those infected with the fungus from Keene’s Earthworm Gods novels. The Void is where Ob and the Siqqusim were confined until they were released in the alternate dimension of Keene’s The Rising. Globe Package Services and the Globe Corporation exist across Keene’s multiverse. Deke’s homeworld is the world of Keene’s short story “Lost Canyon of the Damned.” The zombie virus, Hamelin’s Revenge, is the same one that destroyed civilization in the 2000s in the world of Keene’s Dead Sea and Entombed. The CU version of Brinkley Springs, WV was seen in Keene’s novel A Gathering of Crows. The Thirteen are the main villains of the Labyrinth cycle. The Clickers are the crab-lobster-scorpion beasts that are the primary villains of the Clickers novels. Black Lodge is a government agency that recurs throughout Keene’s fiction.