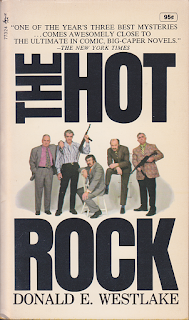 John Dortmunder attempts to break fellow professional thief (and occasional actor) Alan Greenwood out of prison. Greenwood plans to change his name to Alan Grofield after the escape. A professional thief named Alan Grofield appears in Westlake’s Parker novels, written under the pen name “Richard Stark,” and is also the protagonist of four other novels written under the Stark pseudonym. Can the two Alan Grofields be the same person? Another Dortmunder novel, Nobody’s Perfect, claims Greenwood became a successful television actor under his original name. This seems exceedingly unlikely, since Greenwood would be wanted by the police for his prison escape. Since both the Parker and Dortmunder series have links to the CU, it is more likely the reference in Nobody’s Perfect is a distortion, and the two Grofields are indeed one and the same.